U.S. EQUITY MARKETS MIXED HEADING INTO THE LABOR DAY WEEKEND AS NONFARM PAYROLLS MISS BY A LOT BECAUSE OF THE DELTA VARIANT 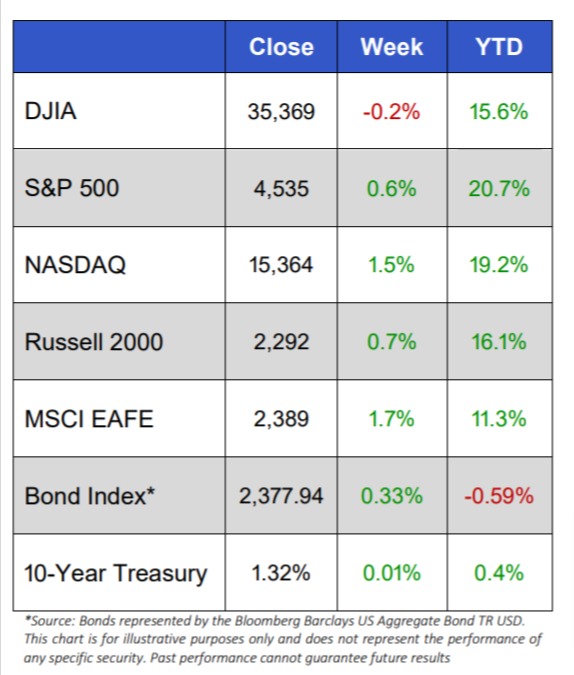 Stocks Mixed on the Week

The week just felt like a slow week on Wall Street and even the economic data wasn’t too exciting. Maybe it’s the end of the summer vacations that kept Wall Street trading volume down or Hurricane Ida that rained out a lot of plans or mixed economic data that just didn’t alarm traders one way or the other. Whatever the reasons, it just felt like Wall Street was trying to find its footing all week. And the markets are closed on Monday in observance of Labor Day

Despite Wall Street’s lethargy this week, the range of sector returns on the week was dramatic, as Real Estate leapt 4.0% whereas Financials declined 2.5%. The Energy sector retreated about 1.5% on the week, eating into last week’s 7% gains as WTI Crude crested $70/barrel on Thursday before retreating.

The economic data reported this week was generally positive as:

The big miss on the week was on Friday when the Employment Situation report for August showed that nonfarm payrolls only increased by 235,000 while expectations were for a gain of about 3x that. From the U.S. Bureau of Labor Statistics release:

“Total nonfarm payroll employment rose by 235,000 in August, and the unemployment rate declined by 0.2 percentage point to 5.2 percent, the U.S. Bureau of Labor Statistics reported today. So far this year, monthly job growth has averaged 586,000. In August, notable job gains occurred in professional and business services, transportation and warehousing, private education, manufacturing, and other services. Employment in retail trade declined over the month.” 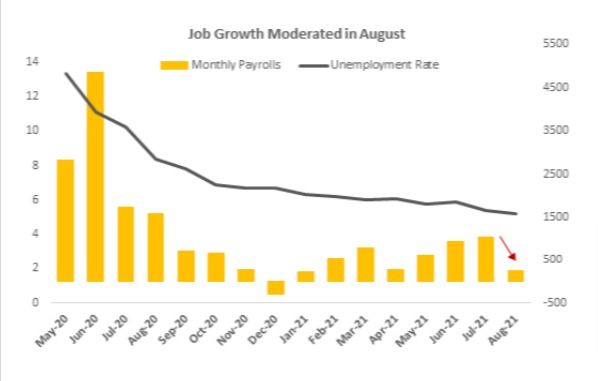 In August, 5.6 million persons reported that they had been unable to work because their employer closed or lost business due to the pandemic–that is, they did not work at all or worked fewer hours at some point in the last 4 weeks due to the pandemic. This measure is up from 5.2 million in July. Among those who reported in August that they were unable to work because of pandemic-related closures or lost business, 13.9 percent received at least some pay from their employer for the hours not worked, up from 9.1 percent in the prior month.

Consumer Confidence Sinks to Six-Month Low Due to Delta Variant

On the last day in August, the Conference Board reported that its Consumer Confidence declined in August, after falling in July. As of August 31st, the Index is at 113.8 (1985=100), which is down significantly from 125.1 in July.

Further, it was reported that:

Said Lynn Franco, Senior Director of Economic Indicators at The Conference Board: “Concerns about the Delta variant – and, to a lesser degree, rising gas and food prices – resulted in a less favorable view of current economic conditions and short-term growth prospects. Spending intentions for homes, autos, and major appliances all cooled somewhat; however, the percentage of consumers intending to take a vacation in the next six months continued to climb.” 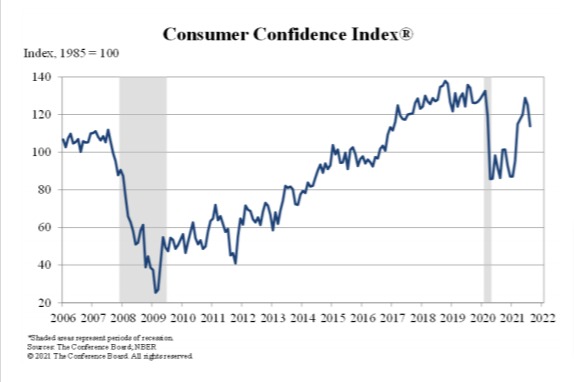 Consumers were less upbeat about their shortterm financial prospects.