The major U.S. equity benchmarks shook off a big decline on Monday and ended the week with modest gains. But after the close on Monday, it looked as if a bigger decline was imminent as the S&P 500 recorded its worst drop since midMay and dipped below its 100-day average.

Monday’s decline really did seem tied to worries that the second largest property developer in China would default on hundreds of billions in debt and that it would spread to other markets around the world. But by Wednesday, Wall Street had decided that the fallout would be mostly contained to China and markets moved steadily up, clawing out small gains by the time Friday’s closing bell was struck.

The other news on the week, besides a lot of housing data, was the Fed’s policy meeting. Markets were tense that the Fed might taper its bond buying program sooner, but the only timetable out of the Fed was that the tapering would begin “soon.” In his post-meeting press conference, Fed Chair Powell reiterated that the Fed would be looking for continued improvement in the labor market before acting.

And while the Fed held short-term rates as is, projections for a rate increase are now evenly split between next year and 2023. Plus, most officials expect at least three 25 basis point rate hikes by the end of 2023.

On Tuesday, the U.S. Census Bureau and the U.S. Department of Housing and Urban Development jointly announced strong housing data. 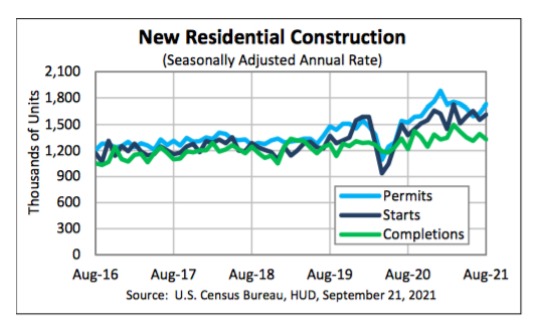 On Tuesday, the U.S. Bureau of Economic Analysis announced that “the U.S. current account deficit, which reflects the combined balances on trade in goods and services and income flows between U.S. residents and residents of other countries, widened by $0.9 billion, or 0.5%, to $190.3 billion in the second quarter of 2021.

The second quarter deficit was 3.3% of current dollar gross domestic product, down from 3.4% in the first quarter. The $0.9 billion widening of the current account deficit in the second quarter mainly reflected reduced surpluses on services and on primary income that were mostly offset by a reduced deficit on secondary income.” 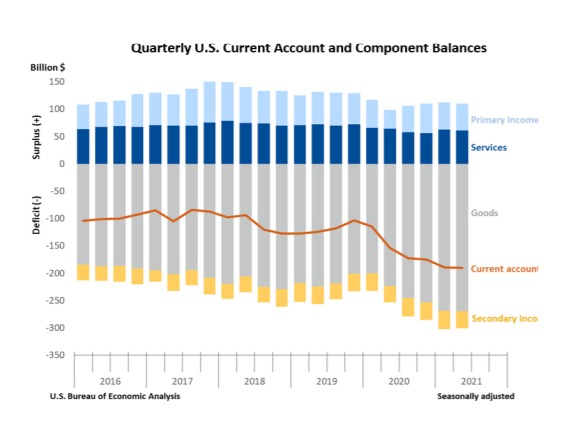 Exports & Imports of Goods and Services 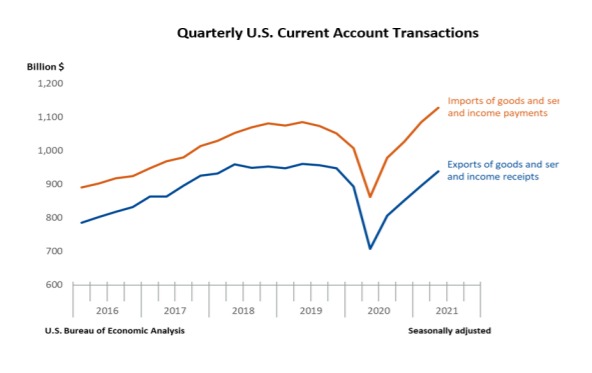