The Purchasing Managers’ Index (PMI) is an index of the prevailing direction of economic trends in the manufacturing and service sectors based on surveys collected from thousands of companies.

“Global PMI summary as of September 2021:

Manufacturing input costs rose at an accelerated rate in September, increasing at one of the sharpest rates seen over the past decade as supply shortages were exacerbated by ever-higher shipping costs. Demand growth cooled, however, alleviating some of the upward pressure on prices, linked in part to less companies building safety stocks compared to earlier in the year.”

The JPMorgan Global Manufacturing PMI, compiled by IHS Markit, showed average factory input prices rising at the third-fastest rate recorded over the past decade, the rate of increase accelerating from August to equal that seen in July though fall slightly short of May’s recent peak.

The rise in costs was first and foremost again linked to suppliers being able to hike prices amid widespread shortages, creating a sellers’ market for many inputs from electronics components through to basic raw materials used for construction industry products. Average suppliers’ delivery times continued to lengthen globally at a rate unprecedented in almost a quarter of a century of survey data, exceeded only by those recorded in the prior three months, underscoring the unparalleled supply chain delays being recorded in recent months as a result of the pandemic.”

“September also saw a rise in the number of companies that reported higher shipping costs to have contributed to higher average input prices. Higher shipping prices were reported by 15 times the normal number of manufacturers during the month, the highest proportion ever recorded.” 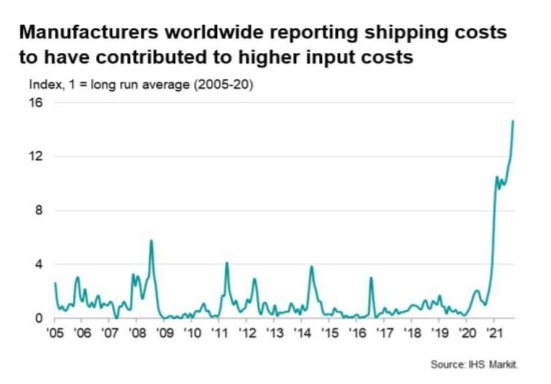 More economic data will be released later this week, including the ADP Employment Report on Wednesday and Wholesale Inventories data on Friday.