The Labor Department creates the Job Openings and Labor Turnover Survey – the JOLTS Report – which tracks monthly changes in job openings as well as job offerings and “quits.”

Unlike other reports that track employment data, the JOLTS reporting period lags by a month, although it does provide additional color to the employment landscape.

On Tuesday, May 11th, it was reported that the number of job openings reached a series high of 8.1 million on the last business day of March. Further:

Job openings increased in a number of industries with the largest increases in accommodation and food services (+185,000); state and local government education (+155,000); and arts, entertainment, and recreation (+81,000). The number of job openings decreased in health care and social assistance (-218,000).

The number of job openings increased in the Northeast and Midwest regions.

The number of hires was little changed in all four regions.

In March, the number and rate of total separations were little changed at 5.3 million and 3.7 percent, respectively.

The total separations level decreased in construction (-82,000) and in state and local government education (-25,000).

Total separations were little changed in all four regions.” 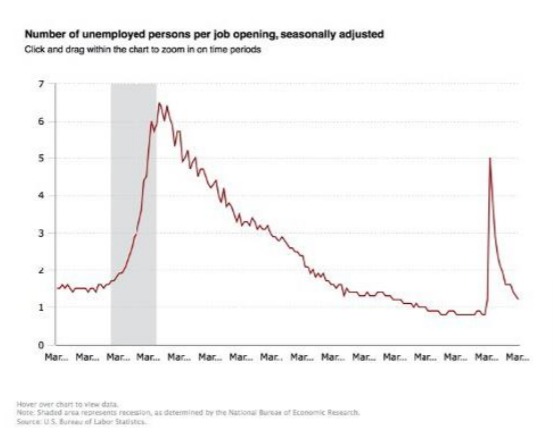 More economic data will be released later this week, including CPI data on Wednesday, Jobless Claims on Thursday and Retail Sales on Friday.