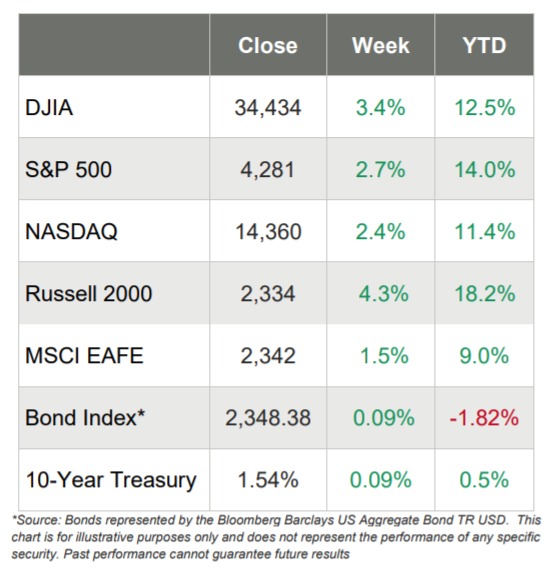 Every Action Has an Equal and Opposite Reaction?

Formally stated, Newton’s third law is: for every action, there is an equal and opposite reaction. And that’s what this week’s market movements felt like on the heels of last week’s decline.

Well, maybe the S&P 500 and NASDAQ were not quite in line with Newton’s third law, but that could be because both indices were too busy marching to new highs and recording their best weekly gains since early April.

U.S. stock indices generally marched higher all week, amidst relatively low summer-like trading volume. The Energy sector was the big winner with a gain of more than 6%, helped along by the price of oil reaching its highest point since October 2018.

The Federal Reserve was in the news again this week, this time saying that the Fed wouldn’t not raise rates prematurely due to inflation. And as if on cue, data that suggests inflation might be moderating was released, including the fact that commodity prices were declining, especially lumber prices.

In addition, Bloomberg reported that retail vehicle prices might soon drop, which is an important data set as the almost 30% year-over-year jump in used car prices accounted for about 1/3 of recent inflation numbers. And earlier in the week, investors received word that new home sales were softer than expected in May, dropping almost 6%.

The June preliminary Purchasing Managers’ Index, a leading indicator of economic activity, showed that output across the private sector expanded at a historically elevated rate. From the release:

“U.S. private sector businesses registered a further marked expansion in activity during June, as further easings of COVID-19 restrictions boosted new orders. The rate of expansion softened slightly from the high seen in May, but remained substantial overall.

Adjusted for seasonal factors, the IHS Markit Flash U.S. Composite PMI Output Index posted 63.9 in June, down from 68.7 in May, but nonetheless signaling a historically elevated rate of expansion in output across the private sector. Moderations in activity growth were seen in both the manufacturing and service sectors, with goods producers hampered in particular by significant supplier delays and both sectors reporting difficulties finding staff.” 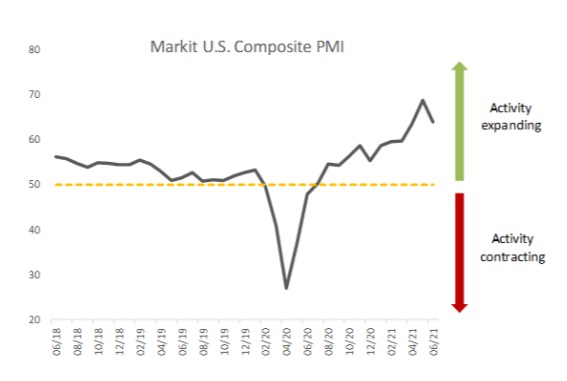 New Home Sales Dip in May

On Tuesday, the National Association of Realtors announced that existing-home sales decreased for a fourth straight month in May. Further, only one major U.S. region recorded a month-over-month increase, while the other three regions saw sales decline. However, each of the four areas again registered double-digit year-over-year gains, which is not surprising given the state of the real estate market and the economy in general this time last year.

According to the release from the NAR, total existing-home sales – completed transactions that include single-family homes, townhomes, condominiums and co-ops – dropped 0.9% from April to an annual rate of 5.80 million in May. But sales in total were up a stunning 44.6% from just one year ago (May 2020).

The NAR further reported that:

Elsewhere Around the World