The week started with a lot of worry, as headlines screaming “Market Sell-Off” and “Markets Tank” were everywhere. And why not, since the S&P 500 had dropped 3% in five days by the time Monday closed. But then one of two things happened: either 1) investors started “buying the dip” or 2) Wall Street just wasn’t reading headlines. Because for each of the next four days, the markets marched higher, pushing NASDAQ, the DJIA and the S&P 500 to record highs.

Besides worries about the delta variant and whether it will lead to renewed business closings and mask mandates, the markets digested a healthy slate of economic news and on balance, the news leaned a bit more toward the negative side:

While less than 25% of S&P 500 companies have reported earnings results for the second quarter of 2021, as of Friday more companies are beating estimates relative to historical averages – and beating those estimates by a wider margin too.

As such, the overall result is that collective earnings are higher this week relative to just last week and higher relative to the previous quarter. Yes, it’s true that some of the relative numbers are off of weaker earnings due to COVID, but overall the trend is encouraging, causing analysts to expect double-digit earnings growth for the rest of the year.

From research firm FactSet’s press release as of the end of market close on Friday:

On Thursday, the Department of Labor reported that for the week ending July 17th, initial claims were 419,000, an increase of 51,000 from the previous week’s level. In addition:

Also on Thursday, it was reported that the Conference Board Leading Economic Index for the U.S. increased by 0.7% in June, after a 1.2% increase in May and a 1.3% gain in April. In addition: 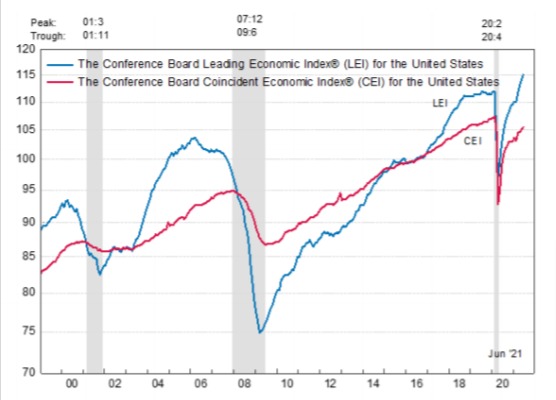 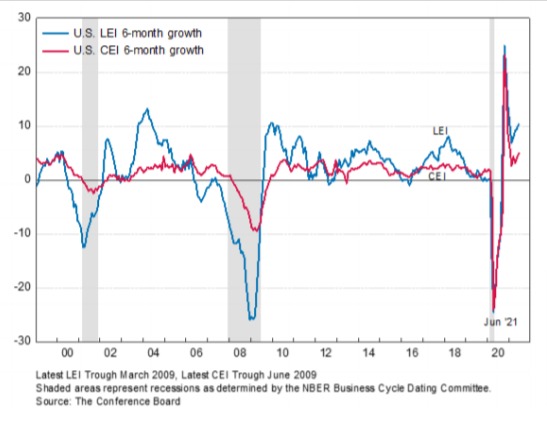 Lumber Prices Adding $30K to the Price of a New Home

On Monday, the National Association of Home Builders released its survey of home builders which gauges builder perceptions of current single-family home sales and sales expectations for the next six (any number over 50 indicates that more builders view conditions as good than poor). The NAHB reported that:

Among the supply-side challenges, the price of lumber and OSB (oriented strand board) has been a particular problem lately. And such, cost increases are putting upward pressures on home prices and sidelining many prospective home buyers. 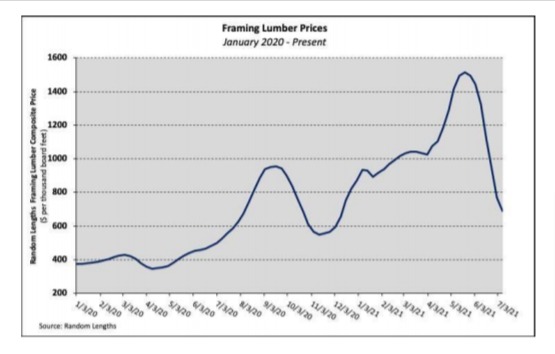 But what you might not know is that framing lumber is only one of the softwood lumber products used in the average home. Other products include plywood, oriented strand board, particleboard, fiberboard, shakes and shingles. 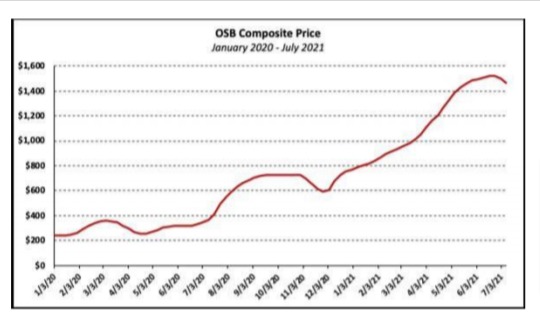 And since April 2020, the price of softwood plywood has increased by more than 200% – and the price of OSB has skyrocketed by nearly 500%.

Based on the average rent-to-value ratio in the most recent HUD/Census Rental Housing Finance Survey, the increase in builder cost and market value for a multifamily structure means tenants pay $92 more a month to rent the average new apartment due to the change in softwood lumber prices.