HIS Markit compiles and reports its Purchasing Managers’ Index, which is data compiled for more than 40 economies worldwide. The data is derived from surveys of private sector companies and the headline number indicates the overall health of an economy and the sub-indices help provide insights into other key economic drivers such as GDP, inflation, exports, capacity utilization, employment and inventories.

In the first week of July, HIS Markit released the following headline:

Here are excerpts from the release:

“Although global manufacturing output growth ran at one of the fastest rates seen for over a decade in June, capacity constraints continued to develop, reflecting a lack of labor and a record worsening of supplier delivery times. Prices continued to rise sharply as a result.

In June, we witnessed another strong rise in factory output, capping off the best quarterly expansion for a decade.

“The upturn was largely attributed to surging demand as many economies around the world continued to open up from COVID-19 related lockdowns and restrictions, while rising vaccination rates also lifted sentiment and demand among businesses and consumers alike, notably in Europe and the US.” 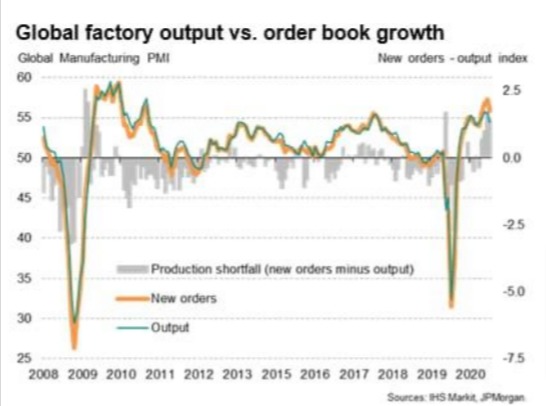 The data also shows that “new orders rose even faster than output for a fourth month running in June, indicating that demand over the past two months is running ahead of production to a degree not witnessed since 2009 with the exception of February last year.

Looking at the anecdotal evidence provided by companies contributing to the PMI surveys, this ‘production shortfall’ could be principally attributed to capacity constraints, both in terms of staffing and component supplies.

The scale of staff shortages was reflected in global growth of employment running behind order book growth to one of the greatest extents for 11 years in June. The shortfall of payroll numbers to new orders was especially acute in the developed markets.

Rising shortages of inputs were meanwhile reflected in an unprecedented lengthening of suppliers’ delivery times in June.

Average prices paid by manufacturers for their inputs continued to rise at one of the fastest rates for a decade in June, due principally to this sellers’ market environment.”

More economic data will be released later this week, including Jobless Claims on Thursday and Wholesale Inventories on Friday.