The current account measures the United States’ international trade balance in goods, services, and unilateral transfers and is reported by the U.S. Bureau of Economic Analysis on a quarterly basis.

For comparison the second-quarter deficit was $198.3 billion.

Further, the third-quarter deficit was 3.7% of current dollar gross domestic product, up from 3.5% in the second quarter.

From the BEA: “The $16.5 billion widening of the current-account deficit in the third quarter reflected a reduced surplus on services and expanded deficits on secondary income and on goods that were partly offset by an expanded surplus on primary income.” 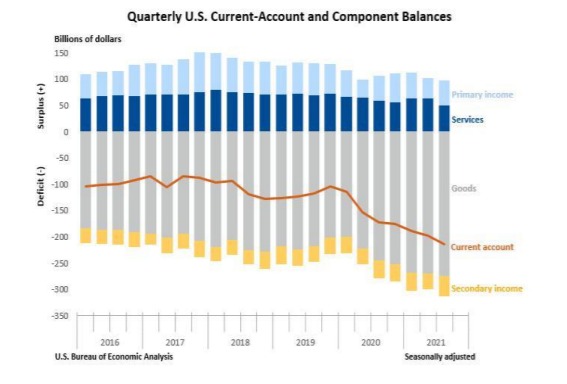 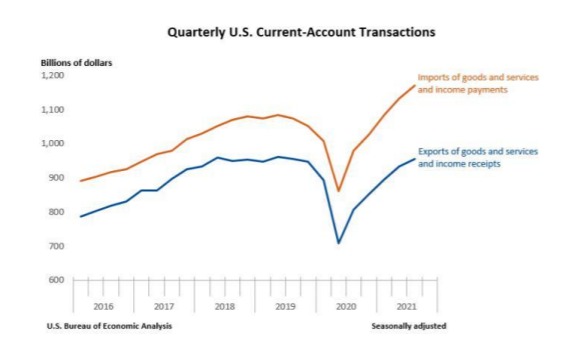 Trade in Services
“Exports of services decreased $0.1 billion to $190.8 billion, primarily reflecting decreases in charges for the use of intellectual property, mostly licenses for the use of outcomes of research and development (such as patents and trade secrets), and in telecommunications, computer,
and information services, mostly computer services. An increase in other business services, mostly professional and management consulting services, partly offset these decreases. Imports of services increased $12.6 billion to $141.0 billion, mostly reflecting increases in travel, primarily other personal travel, and in transport, primarily sea freight and air passenger transport.”

More Data Later This Week
More economic data will be released later this week, including GDP and Consumer Confidence on Wednesday and Jobless Claims and New Home Sales on Thursday.

The week in review

Thought of the week
Last week, Democratic Senator Manchin disavowed support for the $2T Build Back Better Act, which had already been teetering on a very thin Democratic majority. Manchin seems amenable to a $1.8T bill, but with some meaningful revisions, leaving a sliver of hope for a slimmed down deal in 2022.

However, if a bill does not pass, the enhanced child tax credit (CTC) will expire at year-end. The American Rescue Plan, enacted in March 2021, brought three important changes to the CTC: increased benefit levels (annual payments up to $3,600/child from $2,000), expanded access to the lowest income families and advanced monthly installments. This was a boon to lower income families who have a higher propensity to spend.

According to the U.S. Census Bureau’s Household Pulse Survey, 91% of families with an annual income of <$35,000 used their CTC for basic household expenses with 59% using a portion of their benefit on food. As illustrated in the chart, lower income Americans spend disproportionally more of their after-tax annual income on food. Their spending behavior is much more sensitive to external forces, whether that be positively through the enhanced CTC or negatively through higher inflation. As we enter 2022, we are in an environment where the enhanced CTC is set to expire and food inflation is up 6.1% y/y, two factors that may constrain spending for lower income Americans in the short-term. These factors may potentially cause a temporary dent in their consumption which could be a headwind for economic growth next year. Click here to download a PDF of this report.