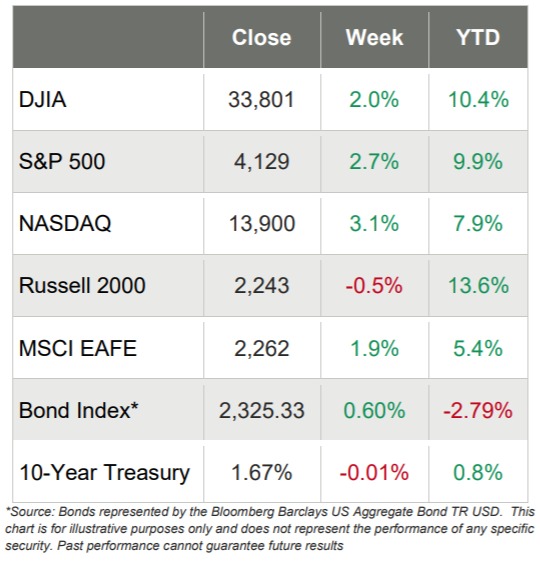 The larger-cap U.S equity benchmarks marched steadily to new record highs this week as the smaller-cap Russell 2000 ended the week with a small loss. NASDAQ was once again the best performer on the week, as it moved up over 3%, but the DJIA and S&P 500 each recorded gains of over 2% too.

In a redo of most of last year, the Information Technology sector led the way with a gain of almost 5% while the Energy sector was by far the worst sector, turning in a loss of more than 4% on the week. Also as occurred most of last year, Growth stocks handily outperformed Value stocks.

The week’s economic data was somewhat negative this week, with a few glimmers of sunshine mixed in:

Inflation on the Rise

On Friday, the U.S. Bureau of Labor Statistics reported that the Producer Price Index for final demand increased 1.0% in March, and final demand prices rose 0.5% in February and 1.3% in January. 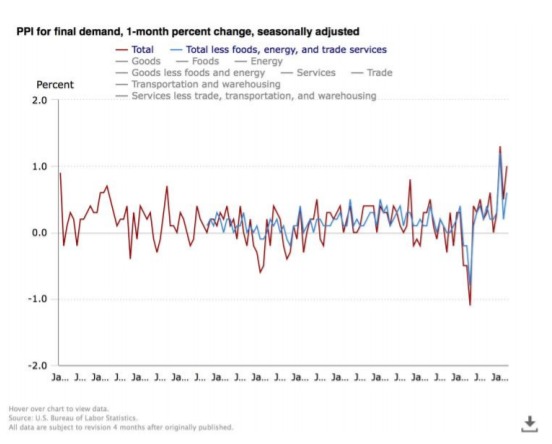 Product detail: Over one-fourth of the March increase in the index for final demand goods can be traced to an 8.8- percent jump in gasoline prices. The indexes for diesel fuel, residential electric power, industrial chemicals, steel mill products, and processed poultry also moved higher. In contrast, beef and veal prices fell 4.3 percent. The indexes for fresh and dry vegetables and for surgical and medical instruments also declined.”

The U.S. Census Bureau and the U.S. Bureau of Economic Analysis announced that the goods and services deficit was $71.1 billion in February, up $3.3 billion from $67.8 billion in January, revised. Further, the release stated that: 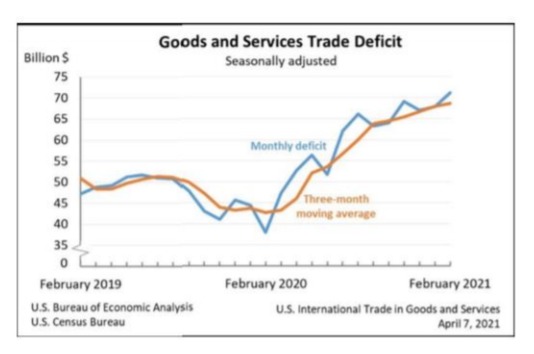 Fastest Rise in Business Activity Since the Summer of 2014

“March PMITM data indicated a substantial increase in business activity across the U.S. service sector, and one that was the steepest for almost seven years. Contributing to the marked upturn in output was the fastest expansion in new business for six years, reflecting strengthening client demand. Firms also registered a renewed rise in new export orders. Meanwhile, rates of input cost and output charge inflation reached fresh record peaks, as firms sought to pass on steep rises in input prices to clients. 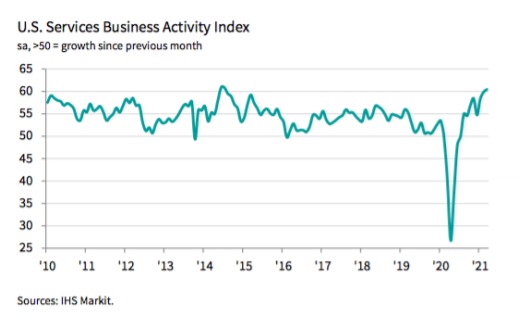 Meanwhile, sentiment among service providers about business in the year ahead improved, helping drive employment growth to a three-month high.

The seasonally adjusted final IHS Markit US Services PMI Business Activity Index registered 60.4 in March, up from 59.8 in February and above the earlier released ‘flash’ estimate of 60.0. The rate of output growth signaled was the fastest since July 2014.

Service providers often stated that the stronger expansion in business activity was due to greater client demand and the easing of virus containment restrictions in some states.

At the same time, new business increased further in March, with the rate of growth accelerating for the third successive month. The pace of the upturn in client demand was the quickest since March 2015. Firms attributed the expansion to greater spending by existing customers as well as the acquisition of new clients, often through more sales and marketing activities. Others suggested that higher confidence stemming from the vaccine roll-out had driven up customer spending.

Total sales were also supported by a renewed increase in new export orders, which rose for the second time in the past four months due to increased demand following easing lockdown restrictions in some markets.

On the price front, input costs soared in March. The rate of inflation accelerated to the fastest since data collection for the services survey began in October 2009. Anecdotal evidence widely linked the uptick in costs to higher prices for key inputs such as PPE, paper, plastics, fuel, and transportation.

Subsequently, firms sought to pass on higher costs to clients through a sharper rise in selling prices. Several companies also stated that stronger client demand allowed a greater proportion of the hike in costs to be passed through. The resulting rate of charge inflation was the quickest on record.

Meanwhile, business expectations regarding the outlook for output over the coming year improved in March. The degree of confidence was robust overall and among the strongest for six years. Optimism was commonly attributed to the ongoing vaccine roll-out and hopes of a substantial boost to new sales if social distancing measures are further eased during 2021.”