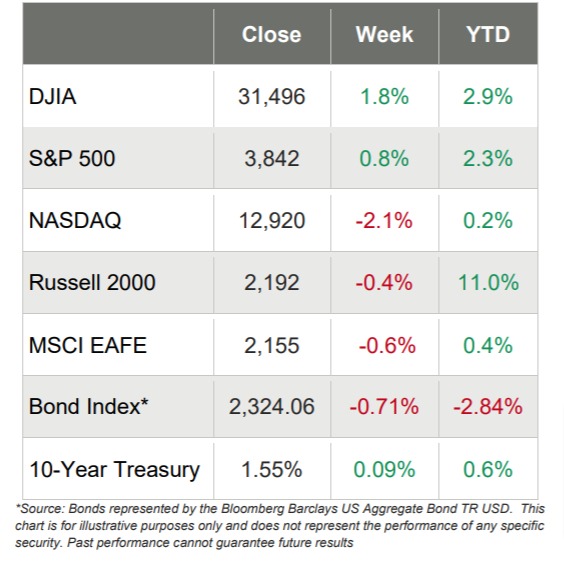 Markets Mixed This Week as Rates Continue to Rise

The major U.S. stock indices were mixed as longer-term interest rates continued climbing. While the mega-cap DJIA and the large-cap S&P 500 managed weekly gains and NASDAQ and the Russell 2000 dropped, it is worth noting that both the DJIA and S&P 500 are ahead of NASDAQ on a YTD basis – and that hasn’t happened in quite some time. The rise in rates weighed more heavily on growth stocks versus value stocks, as evidenced by the impact on NASDAQ as a group. And Wall Street is trying to figure out if the rise in long-term rates was due to inflationary pressures or a resetting of expectations coming out of the pandemic shutdowns.

Within the S&P 500 sectors, the Energy sector outperformed every sector as it jumped double-digits on the week, as the price of oil hit levels not seen in over a year.

On Monday, the federal government began distributing the Johnson & Johnson single-dose vaccine, which was approved over the weekend, and the White House announced that every American adult would have access to vaccines by May, which was at least a couple of months early.

The proposed $1.9 trillion stimulus package was in the news all week, first as the Senate approved debate on the package. But as the week wore on, it appeared as if support was waning, especially as it relates to the controversial $15 minimum wage mandate.

Manufacturing Up for 9th Month in a Row

The February Manufacturing ISM Report On Business was the latest indicator suggesting that the U.S. manufacturing sector was digging out of the deep hole created by COVID-19. But the data is also a stark reminder of the challenges we have with supply chains and rising commodity prices.

For perspective, a reading above 50 indicates expansion in the manufacturing sector (the index bottomed out at a reading of around 41 in April 2020, when economic lockdowns were implemented, and the last few months have shown readings in the high 50s).

Released on Monday, March 1st, the Manufacturing PMIstood at 60.8%, its highest in about 3 years, which suggests that demand is robust. It was also the 9th consecutive month of growth. The flip side is that some prices have reached their highest level in over a decade, driven by supply chain issues and shortages of certain commodities.

From the ISM release:

“The February Manufacturing PMI registered 60.8 percent, an increase of 2.1 percentage points from the January reading of 58.7 percent. This figure indicates expansion in the overall economy for the ninth month in a row after contraction in March, April, and May.”

On March 1st, the U.S. Department of Commerce reported that: 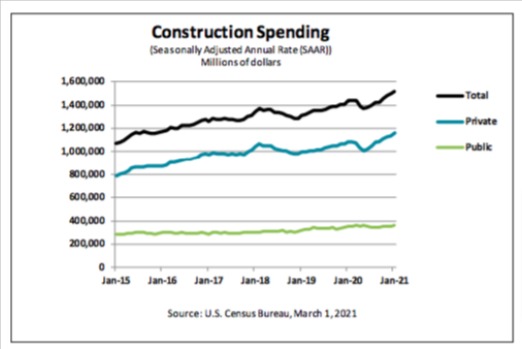 The overall trend for sector performance for the first two months of 2021 was mixed, as performance leaders and laggards rotated throughout both months. Remember that February ended with 6 of the 11 in the red, which is 2 more than how many ended in the red YTD (two months is an exceptionally short time-period to suggest trends). 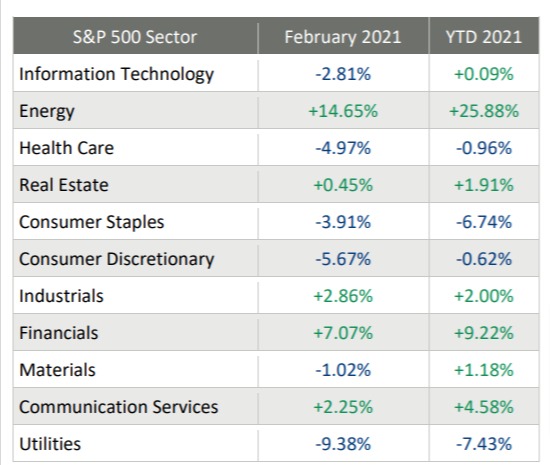 And this week, the differences between the best and worst was even more pronounced, as Energy leapt over 10% and Consumer Discretionary was down almost 3%. That is in just one week.