MARKETS RETREAT ON THE WEEK AS YIELDS CREEP HIGHER, THE FED MAINTAINS ITS DOVISH STANCE AND OIL LOSES $4/BARREL 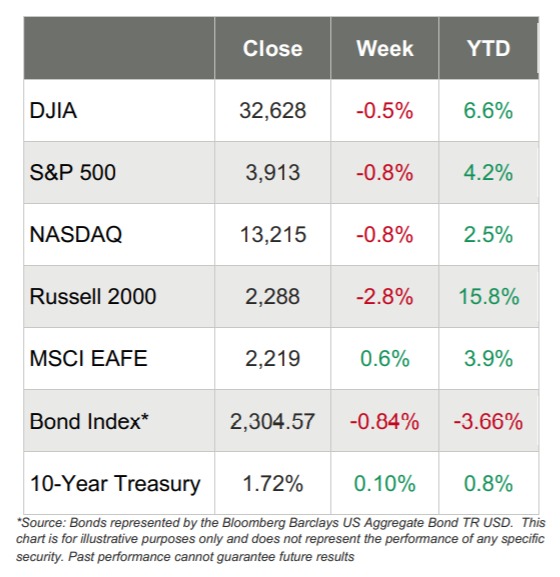 After the first few days of trading this week, investors were hopeful that the momentum to record highs might continue, but as bond yields reached their highest level in a year, the stock markets retreated. And as rates moved up, the sectors that one would expect – namely Financials and Information Technology – moved down.

But it was the Energy sector that dropped dramatically as oil prices saw their biggest daily drop since last summer. Oil was fueled by rising U.S. inventories and worry about nearterm demand, but the Energy sector as a whole was also hit by profit-taking.

Much of the week’s economic data was not so great, especially as recent Retail Sales data and Housing Starts came in much softer than expected. And while there are lots of positives to note in the fight against the pandemic, including that the U.S. would reach 100 million vaccines and positive trend lines, there was worry about variants, especially with scenes of spring-breakers frolicking on beaches without masks and with no regard for social distancing.

But the spring breakers did contribute to the Transportation Safety Administration reporting that daily airline passenger volumes reached their highest level since the start of the pandemic, so there’s that.

As inflation concerns were creeping into Wall Street’s collective worries, Powell managed to ease concerns (at least temporarily) and shared a glass-half-full economic outlook too. In short, Powell shared that:

All told, Powell was optimistic that economic growth was healthy and expected that growth to continue. 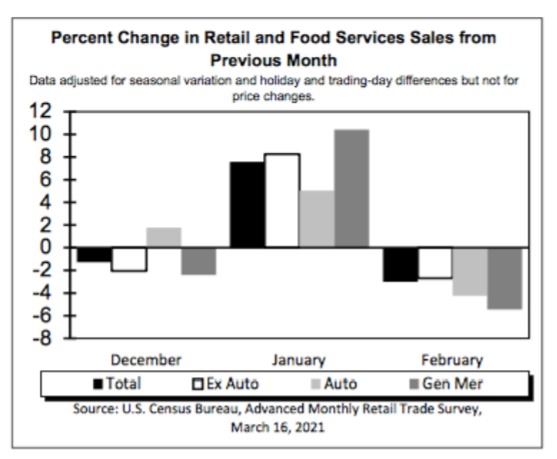 By many accounts, Retail Sales was expected to fall back after January’s surge, inflated by federal stimulus payments, but February’s decline was more than expected. That being said, Wall Street reacted negatively to the fact that sales at gasoline stations (+3.6%) was the only category posting gains in February (inflated by higher gas prices).

Other categories showed steep declines, including: