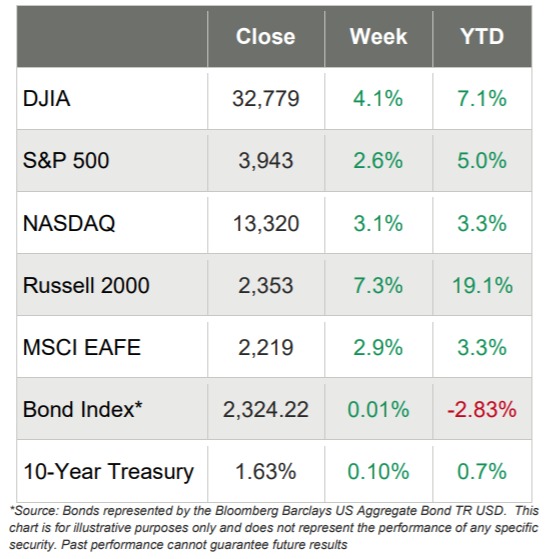 Markets Set All Kinds of Records This Week

Markets advanced significantly this week, with the DJIA hitting intraday highs on every single trading day as debate raged on about another stimulus package while Wall Street dismissed worries about inflation, vaccines, business re-openings and the job market.

The week’s big news was out of Washington as the Senate approved the $1.9 trillion fiscal package, which fueled expectations for additional economic recovery. But there was a ton of economic data this week too, most of it good, including that:

Exports Up, But So are Imports

The U.S. Census Bureau and the U.S. Bureau of Economic Analysis announced on March 5th that the goods and services deficit was $68.2 billion in January, up $1.2 billion from $67.0 billion in December. 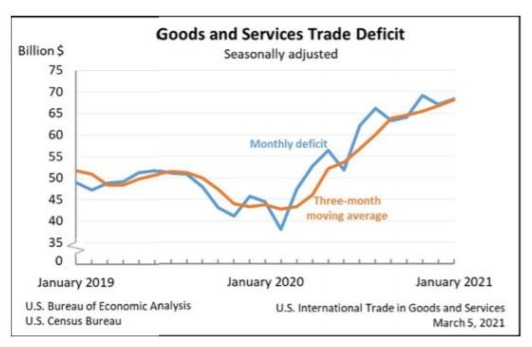 Initial jobless claims fell 42,000 to 712,000 in the week ended March 6, coming in at the low end of forecasts, which had predicted about 725,000. The report confirmed improvement in the labor market when nonfarm payrolls soared 379,000 and the unemployment rate edged down to 6.2%.

Equally important was the data that reported that continuing claims, which lag by a week, fell 193,000 to 4.144 million, the lowest level in nearly a year, bringing down the unemployment rate for insured workers to 2.9%. This was the first time the rate fell below 3.0% since the March 14 pre-pandemic week.

Inflation Rising, But Appears in Check

Mostly as expected, consumer prices rose modestly in February, increasing 0.4% and continuing the trend since last November. On a 12-month basis, inflation moved up 1.7%. The monthly increase, the largest since August 2020 when prices moved up 0.4%, but was driven mostly by a 6.4% gain in gasoline prices, as overall energy prices moved up 3.9% last month.

From the U.S. Bureau of Labor Statistics release dated March 10, 2021:

“The gasoline index continued to increase, rising 6.4 percent in February and accounting for over half of the seasonally adjusted increase in the all items index. The electricity and natural gas indexes also increased, and the energy index rose 3.9 percent over the month. The food index rose 0.2 percent in February, with the index for food at home and the index for food away from home both rising.

The index for all items less food and energy rose 0.1 percent in February. The indexes for shelter, recreation, medical care, and motor vehicle insurance all increased over the month. The indexes for airline fares, used cars and trucks, and apparel all declined in February.”

On March 10th, the Mortgage Bankers Association announced that mortgage applications decreased 1.3% from one week earlier, according to the MBA Weekly Mortgage Applications Survey for the week ending March 5, 2021. Further from the MBA’s release: