Markets were closed Friday in observance of the Good Friday holiday, but the 4 days of trading was plenty to push the benchmarks higher for the week. While NASDAQ returned to its perch of leading the other indices with a gain of 2.6%, it was the large-cap S&P 500 that garnered most of the news as it crossed the purely-psychological 4,000-point barrier for the first time.

The Energy, Materials, Health Care and Consumer Staples all underperformed on the week, losing less than 1%. But in a reversal of the past few weeks and consistent with most of 2020, the Information Technology sector regained the top perch among the 11 sectors.

On Wednesday, Wall Street closed the books on the month of March and the first quarter of 2021 and many are suggesting that the week’s advancements were the result of profit-taking and rebalancing. Whether or not that’s true is hard to discern, but a quick recap of the monthly performance for March is warranted.

Markets Mostly Up in March

Interestingly, the DJIA’s 6+ percentage-point outperformance relative to NASDAQ represented the biggest monthly spread between the two indices since February 2002, according to Dow Jones Market Data. It is especially notable that the DJIA, which has existed for almost 125 years, has outpaced NASDAQ by this much in a month only 19 other times since the NASDAQ index was launched. And that was 1971.

Market Performance Around the World 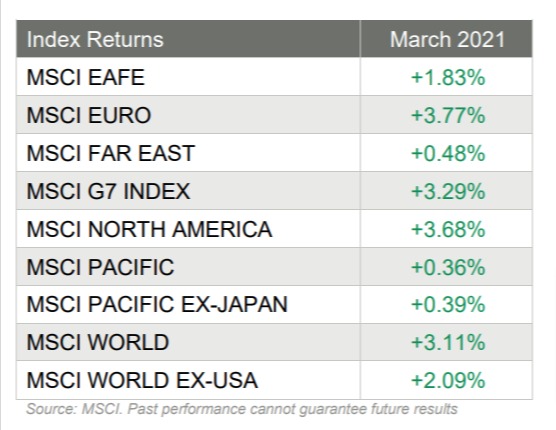 On Tuesday, the Federal Housing Finance Agency announced that house prices rose nationwide in January, up 1.0% from the previous month, and up 12% from January 2020 to January 2021.

Other categories showed steep declines, including: 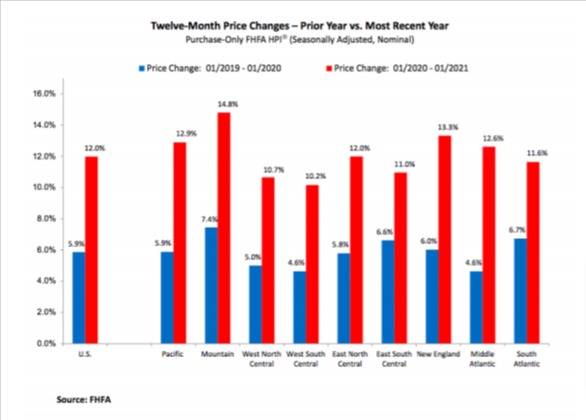 While this data was compiled before February’s spike in mortgage rates, it is still the eighth straight monthly gain of 1% or more, which is unprecedented. Further, the year-overyear appreciation of 12% is also a record going back over 30 years. 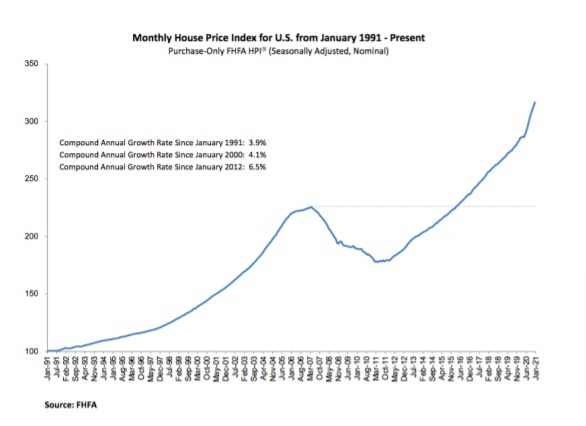