GDP Jumps 6.4% in the First Quarter

On April 29th, the Bureau of Economic Analysis reported that real gross domestic product increased at an annual rate of 6.4% in the first quarter of 2021. For perspective, in the fourth quarter of 2020, real GDP increased 4.3%.

“The increase in real GDP in the first quarter reflected increases in personal consumption expenditures (PCE), nonresidential fixed investment, federal government spending, residential fixed investment, and state and local government spending that were partly offset by decreases in private inventory investment and exports. Imports, which are a subtraction in the calculation of GDP, increased.” 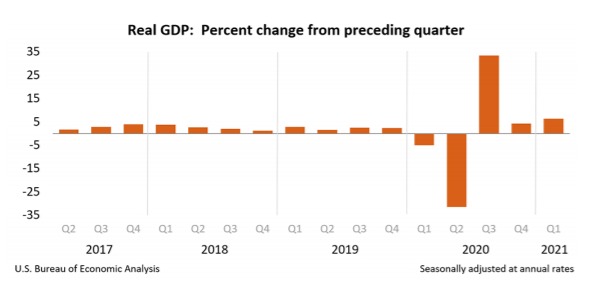 But economists were quick to pounce on this disclaimer:

“The increase in first quarter GDP reflected the continued economic recovery, reopening of establishments, and continued government response related to the COVID-19 pandemic. In the first quarter, government assistance payments, such as direct economic impact payments, expanded unemployment benefits, and Paycheck Protection Program loans, were distributed to households and businesses through the Coronavirus Response and Relief Supplemental Appropriations Act and the American Rescue Plan Act.”

Further, the Bureau of Economic Analysis reported that:

Personal Income Leaps in the First Quarter Too

More economic data will be released later this week, including Productivity and Costs data on Thursday and Consumer Credit data on Friday.